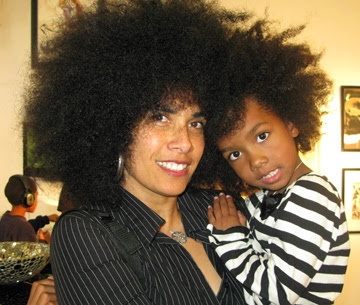 PAVE Ambassador Lili Bernard is a Cuban-born, Los Angeles-based visual artist and actor. She has exhibited her artwork in numerous galleries and institutions.  Her work examines issues of trauma born of sexism and racism, past and present.

A mother of six children, to whom she gave birth in a ten year span, Lili is also a published writer and blogger for the Huffington Post.  She has garnered critical acclaim as an independent curator, longtime arts activist and community organizer.  Lili first created and ran HABLA (Harvesting Asian, Black, Latino Artists) in order to provide platforms for underrepresented artists in Los Angeles.  Realizing that Black artists were the most marginalized of the group, Lili then founded  and organized BAILA (Black Artists in Los Angeles), a current movement aimed at building bridges of access for Black artists into the mainstream art world.  In 2001 she founded the City of Angels Little League which her husband continues to run.

Lili received her MFA from Otis College of Art and Design in 2014, under the tutelage of professors Suzanne Lacy, Charles Gaines, Ulysses Jenkins and Andrea Bowers.  She did her undergraduate studies at Cornell University and City University of New York, earning a B.A. in German. She graduated high school from the American School in Japan in Tokyo, where she spent 11th and 12th grade.  Raised predominantly in Princeton Jct., NJ, Lili attended New Jersey public schools from kindergarten through tenth grade.

As an actress and member of SAG/AFTRA, Lili guest-starred in the last season of The Cosby Show as the zany and very pregnant Mrs. Minifield. On Seinfeld she played Kramer’s Black girlfriend, Anna. She co-starred in the CBS TV mini-series, Stephen King’s Golden Years, and played the female lead in the BBC film, Murder in Okland, opposite Ving Rhames and Eriq La Salle. In theatre, Lili has performed extensively in New York City, Off-Broadway, and in Los Angeles.